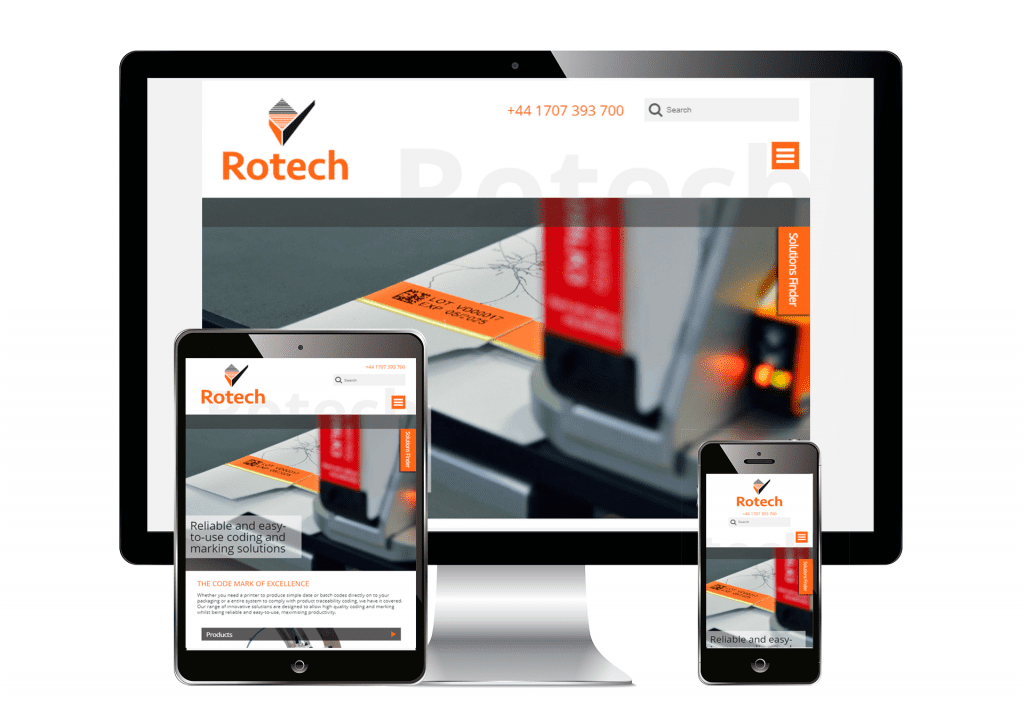 TPMC have been appointed to manage the Rotech Machine’s ongoing PR and Marketing.

We began our relationship with Rotech in 2015 when we were selected to carry out a brand modernisation project for them. They were approaching their 20-year anniversary, which was not only a milestone for the business, it marked the start of a significant growth plan.

This highly successful rebrand has helped them to be recognised as a leading coding and marking technology provider in the packaging industry and was widely praised.

Since the rebrand, TPMC rolled out a series of eye-catching brand assets for Rotech including a new website, digital templates, exhibition stand design and sales collateral.

In 2017, TPMC were then asked to write a comprehensive marketing plan for the business in line with their 5-year business plan. We successfully compiled a detailed working document that defined their positioning, their target markets and a tactical plan.

Following the production of this highly regarded document, Rotech has now engaged TPMC to provide strategic marketing direction for the internal sales and marketing team, along with management of their public relations and communications.

The team at Rotech have always been great fun and a pleasure to work with. They epitomise the right way to grow a business, starting with enhancing their brand and communications, and then taking the right steps to position themselves as market leaders in their field.

We look forward to continuing to work with Rotech for many years to come, and watching them achieve their goals.

← MLB Steel appoint TPMC for rebrand and growth marketing Evolving Great British Heritage Brands →
We use cookies on our website to give you the most relevant experience by remembering your preferences and repeat visits. By clicking “Accept All”, you consent to the use of ALL the cookies. However, you may visit "Cookie Settings" to provide a controlled consent.
Cookie SettingsAccept All
Manage consent

This website uses cookies to improve your experience while you navigate through the website. Out of these, the cookies that are categorized as necessary are stored on your browser as they are essential for the working of basic functionalities of the website. We also use third-party cookies that help us analyze and understand how you use this website. These cookies will be stored in your browser only with your consent. You also have the option to opt-out of these cookies. But opting out of some of these cookies may affect your browsing experience.
Necessary Always Enabled
Necessary cookies are absolutely essential for the website to function properly. These cookies ensure basic functionalities and security features of the website, anonymously.
Functional
Functional cookies help to perform certain functionalities like sharing the content of the website on social media platforms, collect feedbacks, and other third-party features.
Performance
Performance cookies are used to understand and analyze the key performance indexes of the website which helps in delivering a better user experience for the visitors.
Analytics
Analytical cookies are used to understand how visitors interact with the website. These cookies help provide information on metrics the number of visitors, bounce rate, traffic source, etc.
Advertisement
Advertisement cookies are used to provide visitors with relevant ads and marketing campaigns. These cookies track visitors across websites and collect information to provide customized ads.
Others
Other uncategorized cookies are those that are being analyzed and have not been classified into a category as yet.
SAVE & ACCEPT